In 2008, the City of Ranson was awarded approximately $70,000 Safe Routes to School Grant to install approximately 300 linear feet of sidewalk, where none exist, along the east side of Thirteenth Avenue leading to Ranson Elementary School, pedestrian crossing signals which can be activated from either side of the street, appropriate signage, and crosswalk striping.

Ranson Elementary School is located within close proximity to West Virginia State Route 115 (Mildred Street) and Norfolk and Southern Railroad tracks. Many children attending Ranson Elementary walk or ride their bicycles to school due to lack of bus service. The remaining children are dropped off or picked up by their parents. Therefore, the majority of children walking to school face many risks on their way to school - trains, heavy vehicular and truck traffic from State Route 115 and vehicles dropping off and picking children up at school.

Lack of Sidewalks
Historically, the City of Ranson's residential development efforts have lead to a chronic lack of sidewalks and lack of safe road crossings. Students walking to school in most areas have no sidewalks to utilize and are forced to walk in the street. Currently, when students are crossing State Route 115 on their way to school, students are assisted by a human crossing guard. The crossing guard is employed part-time and works only during morning and afternoon hours during peak times when children are traveling to and from school.

Development Plans
In order to address the problems associated with State Route 115, Norfolk and Southern Railroad and vehicular traffic transporting children to and from school, the City of Ranson has planned a series of streetscape and pedestrian improvements as part of its overall community development and downtown economic revitalization efforts. These efforts include applying for all available grant funding opportunities and linking grant-funded, city-funded and new development projects together in order to leverage each projects' overall effect. 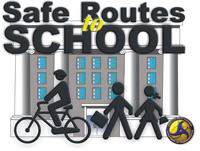